Pneumatic actuated ball valve is different from manual valve. It needs to be in motion and adjustment state during use, and there are many moving parts, and it also bears the impact of various forces such as the unbalanced force of the medium. It is inevitable that various unexpected failures will occur. These failures could be actuators, regulators, and possibly from attached accessory devices. When a fault occurs, it must be dealt with and solved in time, so as not to delay the operation of the equipment of the entire project. Next, let's take a look at the common failure causes and solutions of pneumatic ball valves. 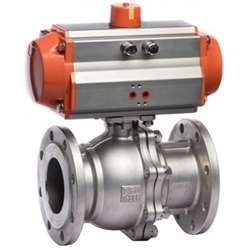 If there is no feedback signal from the pneumatic ball valve, use a multimeter to check whether there is voltage at each contact. To check for proper wiring connections, check for damaged signal wires, and check for loose signal wires.

The valve does not close to zero.

The actuator moves, but the torque is not enough.

Check the adjusting bolts at both ends of the cylinder, adjust them according to the closing condition, and lock them into place.

The valve actuator does not operate.

Pneumatic ball valve can be opened and closed, but the action is slow when opening or closing.

The actuator operates normally, but the ball valve does not operate.

The actuator operates normally, but the valve switch cannot be in place.