How a sound level meter works?

The sound is converted into electrical signals by the microphone, and then the impedance is transformed by the preamplifier to match the microphone and the attenuator. The amplifier adds the output signal to the weighting network, performs frequency weighting on the signal (or external filter), and then amplifies the signal to a certain amplitude through the attenuator and amplifier, and sends it to the rms detector (or external press). Level recorder), the value of the noise sound level is given on the indicator head.

In order to simulate the different sensitivities of human hearing at different frequencies (20Hz-20KHz), there is a network in the sound level meter that can simulate the auditory characteristics of the human ear and correct the electrical signal to a similar value to the sense of hearing. It's called a weighted network. 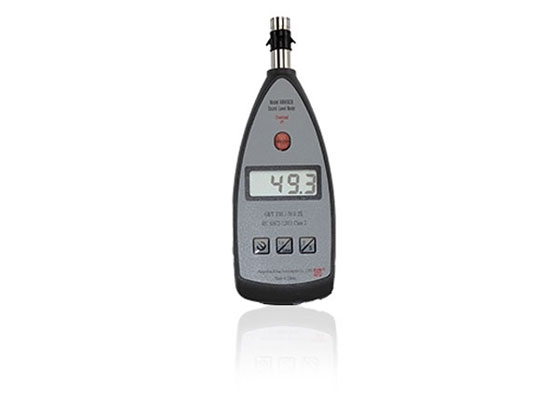 Since people have different perceptions of noise in each frequency band, they are sensitive to the intermediate frequency Z of about 3 kHz, but less to low frequency and high frequency. Therefore, the unweighted signal-to-noise ratio may not be as good as the human ear's subjective perception of the noise level. match. How to integrate the measured value with the subjective sense of hearing? So there is an equalization network, or a weighting network, which moderately attenuates both low and high frequencies, so that the middle frequency is more prominent.

This weighting network is connected between the equipment under test and the measuring instrument, so the influence of the IF noise of the equipment will be "amplified" by the network, in other words, the IF noise that has the greatest impact on the sense of hearing is given a higher weight, the measured signal-to-noise ratio at this time is called the weighted signal-to-noise ratio, which can more truly reflect people's subjective sense of hearing.

The structure of the sound level meter

The sound level meter consists of a microphone, an amplifier, an attenuator, a weighting network, a detector, an indicator head and a power supply.

It is a device that converts a sound pressure signal into a voltage signal, also known as a microphone, a sensor. Common microphones include crystal, electret, moving coil, and condenser.

Capacitive sensors are mainly composed of metal diaphragms and metal electrodes that are close to each other, which are essentially one flat capacitor. The metal diaphragm and the metal electrodes constitute the two plates of the flat capacitor. When the diaphragm is subjected to sound pressure, the diaphragm is deformed, the distance between the two polar plates changes, and the capacitance also changes, thereby generating an alternating voltage whose waveform is related to the sound pressure level within the linear range of the microphone. The ratio is formed, and the function of converting the sound pressure signal into a voltage signal is realized.

Condenser microphone is an ideal microphone in acoustic measurement. It has the advantages of large dynamic range, flat frequency response, high sensitivity and good stability in general measurement environment, so it is widely used. Since the output impedance of the capacitive sensor is very high, it is necessary to perform impedance transformation through a preamplifier, which is installed inside the sound level meter near the part where the capacitive sensor is installed.

In order to display the amplified signal through the meter, a detector is also required to convert the rapidly changing voltage signal into a slower changing DC voltage signal. The magnitude of this DC voltage is proportional to the magnitude of the input signal. According to the needs of measurement, the detectors are divided into peak detectors, average detectors and RMS detectors. The peak detector can give the Zda value of a certain time interval, and the average detector can measure its average value in a certain time interval. Root-square detectors are used in most measurements, except for pulses like gunshots that need to measure their peaks.

The rms value detector can square, average and square the AC signal to obtain the rms value of the voltage, and then transmit the rms voltage signal to the indicating meter. The indicator head is an electric meter. As long as the scale is calibrated to a certain extent, the decibel value of the noise level can be directly read from the head. The damping of the sound level meter head generally has two blocks of "fast" and "slow". . The average time of "fast" gear is 0.27s, which is very close to the physiological average time of human auditory organs; the average time of "slow" gear is 1.05s. When the steady-state noise is measured or the sound level change process needs to be recorded, it is more appropriate to use the "fast" gear; when the fluctuation of the measured noise is relatively large, it is more suitable to use the "slow" gear.