Sound level meter, also known as noise meter, is an instrument that measures the sound pressure level or sound level of sound according to certain frequency weighting and time weighting. It is the most basic and most commonly used instrument in acoustic measurement. The sound level meter can be used for the measurement of environmental noise, machine noise, vehicle noise and other kinds of noise, as well as for electrical and architectural acoustics measurements. Vibration is measured using a sound level meter.

Sound level meter is the most basic instrument in noise measurement. The sound level meter is generally composed of a condenser microphone, a preamplifier, an attenuator, an amplifier, a frequency weighting network, and an RMS indicator. The working principle of the sound level meter is: the microphone converts the sound into an electrical signal, and then the preamplifier transforms the impedance to match the microphone and the attenuator. The amplifier adds the output signal to the weighting network, performs frequency weighting on the signal (or external filter), and then amplifies the signal to a certain amplitude through the attenuator and amplifier, and sends it to the rms detector (or external power supply). flat recorder), the value of the noise sound level is given on the indicator head. 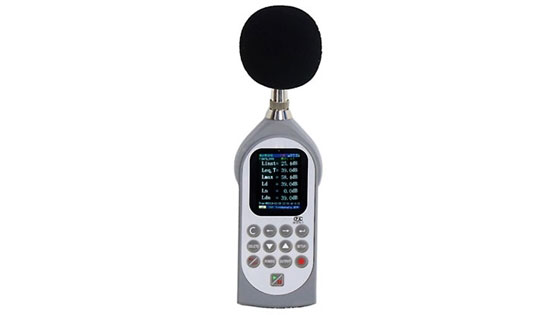 The sound level meter adopts advanced digital detection technology, which greatly improves the stability and reliability of the instrument. The sound level meter has the advantages of simple operation and convenient use, and has the characteristics of large dynamic range, large-screen LCD digital display, automatic measurement and storage of various data and so on.

How to Classify Sound Level Meters?

It has good quality and can be used in conjunction with various band-pass filters. The output of the amplifier can be directly connected with a level recorder and a tape recorder, and the noise signal can be displayed or stored. If the microphone of the precision sound level meter is removed and replaced with an input converter and an accelerometer is connected, it becomes a vibration meter and can be used for vibration measurement. In recent years, some people have divided the sound level score into four categories, namely type 0, type 1, type 2 and type 3. Their accuracies are +0.4 dB, +0.7 dB, +1.0 dB and +1.5 dB respectively.

At present, for the sound level meter used for measuring noise, the response of the meter head can be divided into four types according to the sensitivity:

The sound level meter with digital display of measurement results not only has the advantages of intuitive and accurate reading, but also can be processed with other analysis and processing instruments and computers through BCD code output.

The effective value of the measured signal is measured by the pulsation characteristics of the capacitor at different times, and it has a high crest factor capacity, so it can respond to the pulse sound with a short duration and a low repetition ratio. In our daily life, we often encounter discontinuous noise, that is, impulse sound or impact sound, such as typewriter noise, punching bed and so on. The duration of this noise is very short, the pit viper may appear for a long time, and even only appear once in a certain period of time. To measure with a general sound level meter, there will be a large error, and a pulse sound level meter should be used.