An air compressor is a device that converts power into potential energy stored in compressed air. By one of several methods, an air compressor forces more and more air into a storage tank, increasing the pressure. Air compressors are widely used in industrial production to provide power for production. After the air is compressed, it can be used as power, machinery and pneumatic tools, as well as control instruments and automation devices. Ranging from the drive of various pneumatic machinery to the national defense, the power converted by the air compressor is used.

There are many types of air compressors. The classification is as follow: 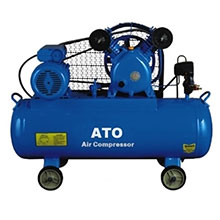 Screw air compressors are positive displacement compressors with a piston in the form of a screw. It is the most widely used type of compressor today. The main components of the screw compression element are male and female rotors, which move close to each other, gradually reducing the volume between them and in the cavity. The pressure ratio of the screw type depends on the length and profile of the screw and the shape of the exhaust port. The screw element is not equipped with any valve, and there is no mechanical force that creates an imbalance. It is therefore possible to work at high shaft speeds. 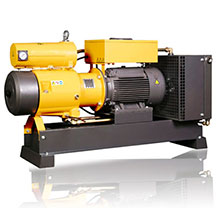 Since the rotor is eccentrically arranged in the cylinder, a crescent-shaped space is formed between the inner wall of the cylinder and the outer surface of the rotor. When the rotor rotates, the sliding vane is thrown out of the groove by centrifugal force, and its end is close to the inner wall of the machine body, and the crescent-shaped space is divided into several fan-shaped chambers by the sliding vane-basic displacement. Within one rotation of the rotor, the volume of each element will gradually increase from the minimum value to the maximum value, and then gradually decrease from the maximum value to the minimum value. With the continuous rotation of the rotor, the basic displacement changes over and over again following the above rules.

The principle of the centrifugal air compressor is that the impeller drives the gas to rotate at a high speed, so that the gas generates centrifugal force. Due to the diffused flow of the gas in the impeller, the flow rate and pressure of the gas after passing through the impeller are increased, and compressed air is continuously produced.