I. Overview
The air compressor has a wide application in factory production. It burdens the great task of providing air source for various pneumatic components and devices. Therefore, the performance of the air compressor directly affects the manufacturing technology and product quality. The air compressor is a kind of mechanical device which presses the air into the air storage pot and then maintains a certain pressure. It belongs to the load with constant torque. Its operating power is in direct proportion to the revolving speed. Therefore, as to the operating power, the energy saving effect of adopting VFD control is far less significant than the quadratic load of the fan pump. However, the air compressors are always in the long-time continuous operating status. The traditional working mode is employing the control mean of opening and closing the air feeding valve, which means to close the valve when the pressure reaches the upper limit, thus enabling the air compressor to enter into light load operation. While open the valve when the pressure reaches the lower limit, thus enabling the air compressor to enter into full load operation. Such a frequent load increasing and decreasing process will not only make the air supply pressure fluctuation, but also change the loading status of the air compressor frequently. In addition, in design, the possibility of the air compressor in working under full load for a long time can't be eliminated. So the motor capacity should be selected according to the maximum demand. Therefore, the motor selected usually has a big capacity. However, in practical operation, the percentage of the light load operation is very high, thus causing the tremendous energy wastage.
It is worth mentioning that the pressure stability of the air supply has great influence to the product quality. Usually the manufacturing technology has a certain requirement to the pressure of the air supply. If the pressure is low, the technological requirement can't be satisfied. There might also be waste products. Therefore, in order to avoid the insufficient air pressure, usually the required value of the pressure is higher, thus causing high cost and consumption of the air supply. There are also some unsafe elements.
With the development of the VFD speed control technology, the device will have the advantages of easy operation, maintenance free and high control precision and so on. When the normal motor adopts the VFD speed control, in the condition that its dragging load has no change, the manufacturing technological requirements can be referred to regulate the revolving speed output to satisfy the requirements of the working condition. Therefore, the scheme of driving by the VFD can be used to replace the scheme of the loading and unloading air supply controlling mean, thus the motor can regulate the revolving speed automatically according to the air quantity, so as to ensure the constant air pressure. Then the motor can have continuous operation under the rated revolving speed. It can overcome many disadvantages brought by the frequent change of the operating status of the motor, thus making the system to realize the purpose of having high-efficient and energy-saving operation. 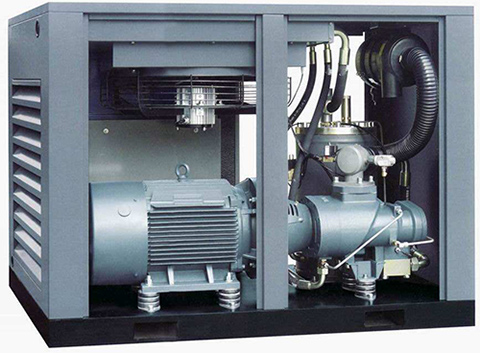 II. Control principle
The VFD speed control system regards the network pressure as the control object. The pressure transmitter changes the pressure in the air storage tank into the electrical signal to send into the PID regulator inside the VFD, so as to compare with the pressure setting value. Then calculation will be made according to the set PID control mode based on the difference value. The control signal will be generated to control the output signal and inverter frequency of the VFD, thus adjusting the revolving speed of the induction motor, so as to maintain the practical pressure to be always as the setting pressure.
III. Parameter setting of ATO VFD for the air compressor