I. Overview
The tower crane is a lifting device with extensive application in construction site. The traditional controlling means usually employ AC wound-type electromotor serial resistance for starting and speed regulating. Because of long-term heavy load operation, frequent positive and negative revolving, the impulse current is rather great. Combing the bad environment of some working fields, the slip ring, carbon brush and contactor of the motor are often damaged. The phenomenon like burnt contact terminal of the contactor, flaming carbon brush, over burning of the motor and resistance usually occur. 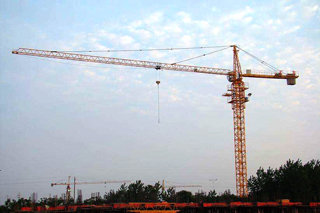 In addition, because of the complicated circuit, the bearing of the swing mechanism has to be exchanged usually. Since the main hoisting mechanism is mainly working on one shaft by two motors, the high-speed motor is still in working status while the low-speed motor is in braking status. They are always in the contradiction of one working and one braking. In addition, the mechanical shock of switching from high speed to low speed is great, the tooth striking phenomenon usually occurs. There was once the case that the product has been positioned and the worker has already hold the mooring rope, tooth striking phenomenon happened in switching from high speed into low speed, then the low-speed motor has brake failure. It is very dangerous. Occasionally, there is also axle breaking phenomenon. The high malfunction rate has big influence to the manufacturing, thus causing high maintenance quantity and cost.
Because the induction motor has incomparable advantages: Simple and solid structure, cheap price, and easy maintenance. So using the means of VFD dragging three-phase induction motor replaces the means of traditional speed regulating, can solve the problem of high failure rate of the tower crane fundamentally. Moreover, it has advanced technology and significant energy saving effect. It is the ideal transmission controlling device of the tower crane.
II. Working principle