Silicon rectifier has a long history of use and mature technology and is the mainstream product of rectifier.

Various rectifier circuits have different ripple coefficients. Its order from large to small: three-phase half-wave rectification, three-phase full-wave bridge rectification, or six-phase double inverse star rectification with the balanced reactor. The latter works with rectifier elements in parallel, the waveform is the smoothest, the rectification efficiency is higher, the work is also more reliable, when the most commonly used one.

To obtain low ripple output, it is necessary to use filtering or other special measures. The use of capacitors, inductive energy storage components for filtering, is a common measure to change the pulsating DC into a smoother DC. However, in practice, in addition to small rectifiers for testing, industrial production is not filtered. Special circumstances can use large inductors. Capacitance is not suitable for filtering in the case of low voltage and high current. Capacitive filtering, for industrial frequency rectification, is only suitable for a very small power rectifier power supply. For example, the output 10A single-phase full-wave rectifier, to achieve low ripple output, the filter capacitor should reach 0.1F or more. As the frequency increases, the required capacitance decreases. 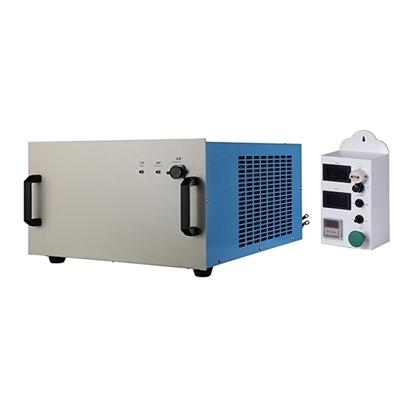 It uses an industrial frequency transformer to transform the AC input voltage into a lower (10V to 20V) AC voltage and then rectifies and regulates the voltage through the SCR. The control mechanism is through the control circuit to control the conduction angle of the SCR to achieve the output voltage and current regulation. The disadvantages of this kind of power supply are large size, heavyweight, noise, power consumption, and ripple. With the increasing requirements of the production process for coating quality and automatic control, as well as people's awareness of energy saving and environmental protection, it has been gradually eliminated in PCB plating. It is mainly used in industrial plating with higher current.

It will be AC power grid by EMI anti-electromagnetic interference line filter, direct rectification, filtering, DC voltage conversion by the converter into tens or hundreds of kHz of a high-frequency square wave, isolated by high-frequency transformer, step-down, and then by high-frequency filtering output DC voltage. After sampling, comparison, amplification, and control drive circuit, control the duty cycle of the power tube in the converter to get a stable output voltage (or output current).

The regulator tube of high-frequency switching rectifier works in switching state, with small power loss, efficiency can reach 75%~90%, small volume, and lightweight, and the accuracy and ripple coefficient is better than silicon rectifier, and the accuracy required by production can be achieved in the full output range. It has self-protection capability and can start and stop at will under the condition of carrying the load. It can be easily connected with a computer, which brings great convenience to automatic production and is widely used in the PCB plating industry.

Using voltage or current feedback control, pulse-width modulation (PWM) high-frequency switching rectifier, operating frequency mostly below 50 kHz. It is through the interruption of power flux and adjust the duty cycle method, change the width of the drive voltage pulse to adjust the output current, so that the device works in the "hard switching" state, that is, forced on (when the voltage is not zero) or forced off (when the current is not zero), so that the switching power tube switching period at the same time there is a high voltage and high current cross, so Large switching losses and strong spike interference. Transformer leakage inductance and the high current rate of change excited by the high voltage spikes, not only easy to damage the power tube, but also produce significant electromagnetic radiation, reducing the reliability and power supply efficiency.

Switching power supply its frequency has reached audio, through the filter to achieve low ripple output is much easier to implement. And current stabilization, voltage stabilization, and other functions are more easily achieved.

With the development of power electronics science and technology, plating rectifiers are being developed from a single function to a multi-function. As the pulse power supply is mainly controlled by embedded single-chip computers, etc., so in addition to the realization of pulse output, generally has a variety of control functions.

Aluminum anodizing or hard chrome plating often requires reverse electrolysis, high current impact, step feeding, etc. The conventional power supply can only be achieved manually. The pulse power supply with multi-stage operation mode only needs to be set in advance and can be automatically adjusted in sequence during production. This feature is very useful for hard chrome plating.

Positive and negative pulse frequency, duty cycle, and forward and reverse output time can be adjusted independently, which is flexible and convenient to use. With the hard chrome plating process, different physical properties of the plating layer can be obtained.

While outputting forward and reverse pulse current, a pure DC component is superimposed by the same power supply, which widens the scope of use and application of pulse power supply.

In recent years, the domestic multi-functional pulse power supply technology has become mature, in which the pulse waveform vertical degree, waveform smoothness, stability, anti-interference, and other indicators reach or even exceed the foreign level.
DC power waveform has a prominent impact on the quality of electroplating, for example, high frequency fixed pulse width high-frequency voltage/stable current pulse power plating will produce special effects, which is also the effect of ordinary DC power plating can not be achieved, some phenomena can not be explained by conventional electrochemical theory. The effect of DC waveform on plating deposition is difficult to predict theoretically, but only through a large number of experiments to make a relative comparison and filter out the appropriate waveform.

In recent years, the new zero voltage conversion (zvT) and zero current conversion (ZCT) technology, or "soft switching" technology, a combination of the advantages of both PWM switching and resonant conversion technology: both pulsed square wave efficient power transfer and constant frequency control to optimize parameters, but also the resonant technology of low loss and zero voltage conversion. characteristics of resonant technology. This "zero-switching" technology makes full use of the resonance between the leakage inductance of the transformer and the output junction capacitance of the power tube to produce the conditions of zero-voltage conduction and zero-current cutoff, where the voltage is zero when the switch is on and the current flowing through the switch is zero when it is cut off. Therefore, it greatly reduces the switching voltage, current stress, and spike interference of the power tube, reduces the power consumption, and significantly improves the switching efficiency.