The gearbox system includes gears, driveshafts, bearings and box structures. Among them, the box structure plays a supporting and sealing role in the whole system, and the probability of failure is very low. Therefore, in the gearbox, the failure mainly occurs in the gear, transmission shaft and bearing. According to statistics, gear, shaft and rolling bearing failures account for more than 90% of gearbox failures.

In the fault diagnosis of the gearbox, it is generally only necessary to give whether the fault occurs and the location of the fault to carry out the fault analysis. According to the characteristics of the vibration signal, the common typical fault forms are: 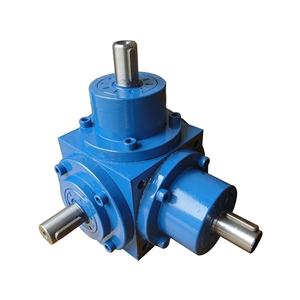 Severely bent shafts are a more serious form of failure in gearboxes. When the shaft is severely bent, large impact energy will be generated, resulting in serious consequences, and its vibration signal is also different from mild bending.

Shaft imbalance is a typical failure of a shaft in a gearbox. Unbalance refers to the unbalanced vibration of the shaft due to the existence of eccentricity, which can be caused by deformation after manufacture, installation and use. When the shaft is unbalanced, the tooth profile error will also be caused in the gear transmission, but this kind of fault is obviously different from the simple tooth profile error.

Axial play mainly occurs when helical gears are used. When there are two helical gears engaged in meshing at the same time on the same shaft, and there is no good positioning and locking device in the axial direction, sometimes the phenomenon of axial play occurs, which is mainly caused by the unbalanced axial force. of. Axial play will seriously affect the accuracy and stability of gear transmission, and may also cause impact wear on the end face of the gear teeth, which is a serious fault.

Typical failures of rolling bearings in gearboxes are fatigue spalling and pitting of the inner and outer rings and rolling elements. As the shaft rotates, the inner and outer rings and the rolling elements experience mechanical shock during contact, producing a force with a large variation called shock pulse. When the rolling bearing in the gearbox fails, its energy is much smaller than the vibration energy generated by the gear, so it is one of the difficulties in diagnosis.

The above are common troubleshooting of gearboxes. When the planetary gearbox, right angle gearbox, and worm gearbox have the above problems, fault diagnosis can be carried out in time. If you have a problem that cannot be solved, please contact us in time.