How to Calibrate a Digital Crane Scale?

Due to its simple structure, the digital crane scale doesn't need to be installed in a fixed place, and is convenient for moveable weighing. It is widely used in docks, steel and other industries. Just hang the cargo on the hook of the digital crane scale, lift the hook scale and cargo off the ground by lifting equipment. The weight of the cargo can be quickly measured according to the principle of gravity. Due to the structural limitations of crane scales, there are usually a tension load cell, a display meter and transmitting & receiving devices. The digital crane scale has rich functions and can remotely operate and receive measuring data. 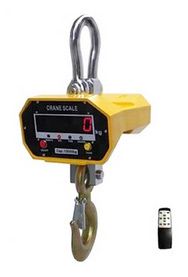 After installation, check whether all parts of the digital crane scale are intact. The crane scale body should not contact any part of the foundation, and the space between the scale body and the protection iron casing must be 10mm ~ 15mm.

Before debugging, the power switch should be turned on at first to warm up digital crane scale for 15 minutes.

The calibration method is generally the same as that of the electronic truck scale, the only difference is in the eccentric load calibration.