The reactor has the function of passing DC and resisting AC in the circuit. When an unsteady current flows through a conductor, a changing magnetic field will be generated, which will in turn affect the current, so any conductor will have a self-inductance phenomenon. Reactors are widely used in the system. Based on years of operating experience, the author introduces several common faults and their solutions. 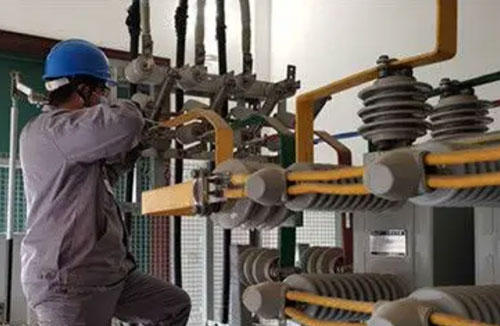 After the reactor operates in outdoor atmospheric conditions for a period of time, dirt will be deposited on its surface. In heavy fog or rainy days, the surface dirt layer will be damp, resulting in increased surface leakage current and heat generation. Due to the different speed of water evaporation, a dry area appears locally on the surface, causing a change in local surface resistance, and the current forms a local arc at the interruption. Over time, the arcs will merge to form creeping dendritic discharges. The inter-turn short circuit is a further development of dendritic discharge, that is, the current in the short-circuit turns increases sharply, and the temperature rises damages the insulation of the turns.

In order to ensure that dendritic discharge and inter-turn short-circuit faults do not occur in the outdoor reactor, the surface discharge can be greatly suppressed by applying hydrophobic paint; the annular current-sharing electrode is embedded at the end to overcome the leakage current concentration phenomenon on the lower surface; A cap and an additional rain-proof layer can suppress the surface leakage current to a certain extent. In addition, in areas with severe pollution, the frequency of cleaning the surface of the reactor and the surface of the insulator should be increased.

The temperature of the reactor is too high during operation, which will accelerate the aging of the polyester film. When the rainwater penetrates into the lead wire or the epoxy crack on the lateral surface, the aging will be accelerated, and the mechanical strength will be lost, resulting in a short circuit between turns and causing fire and combustion.

The reasons for the temperature rise of the reactor are: poor welding quality. The welding resistance at the welding point of the terminal and the winding generates additional resistance and heats up. In addition, due to the small design margin of temperature rise, the design value is very close to the temperature rise limit specified by national standard. In addition to the design and manufacturing reasons, if the air passage of the reactor is blocked by foreign objects during operation, resulting in poor heat dissipation, which will also cause the local temperature to be too high and create a risk of fire.

For the above situation, the ventilation conditions of the reactor should be improved, and the operating ambient temperature of the reactor should be lowered to limit the temperature rise. At the same time, it shall be regularly shut down for maintenance (the surface of the reactor and each vertical cooling air passage can be washed with a tap water column) to remove the dirt accumulated on the surface, keep the air passage unobstructed, and conduct a detailed inspection of the external insulation state. Deal with any problems in time.

The vibration of the iron core reactor becomes larger during operation, which causes the fasteners to loosen and the noise to increase. The main cause of vibration is the fault of the magnetic circuit and the iron core is not compressed or the clamp is loose during manufacture and installation. Generally, it is only necessary to re-tighten the fasteners. Sometimes it is encountered that the AC noise (fundamental frequency is 100Hz) of the air-core reactor is very large after it is put into operation, and accompanied by rhythmic bursts of beat frequency, the foundation heats up. This is because the strong alternating magnetic flux in the operation of the air-core reactor brings the resonance and eddy current caused by the alternating electromagnetic force to the surrounding steel components, especially the foundation embedded parts, and generates heat. This is the fundamental problem of infrastructure design and installation, and the reactor can only be stopped for complete renovation.