Reactor is used to maintain the current and stabilize the voltage of the electrical system. The reactor adopted in the power grid is substantially a hollow coil without the permeability magnetic material. It can be arranged in vertical, horizontal and stagger assembling forms as the demand. When the electrical system has short circuit, the short-circuit current with high values will be generated. If it is not restricted, it is very difficult to maintain the dynamic stability and thermal stability of the electrical equipment. Therefore, in order to satisfy the interrupting capacity requirement of some disconnectors, reactors are usually connected in the outgoing breaker in series, so as to increase the short-circuit impedance and limit the short-circuit current.

The main function of DC reactor is to reduce the higher harmonic components of the input current, improve the power factors of the input power source, and limit the short-circuit current. Before the DC reactor is connected with the filter capacitor, it hinders the impulse current amplitude entering the capacitor, and reduces the AC impulse of the busbar. When the power of the frequency converter is higher than 22kW, it is suggested to consider the application of DC reactor. The greater the power of the converter is, there should be a higher possibility of using the reactor. Because when there is no DC reactor, the capacitor filtering of the frequency converter will result in the serious distortion of the current wave, thus further causing the serious distortion of the network voltage waveform. In addition, it is very harmful to the service life of the rectifier bridge and filter capacitor of the frequency converter. 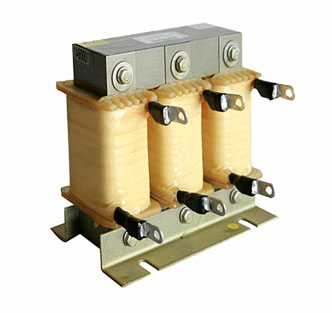 The functions of input line reactor
It can restrain harmonic current, improve power coefficient, weaken surge voltage in input circuit, the impact of current on VFD, the influences of power voltage, limit current surge caused by grid voltage change and switching surge, spike pulse or voltage defects in phase change of rectifying circuit, effectively protect VFD and improve power coefficient. Input line reactor not only can stop the disturbance from power grid but reduce the pollution of power grid by harmonic current produced by rectifying unit.