1. The laser output power decreases after the laser marking machine is used for a period of time.

(1) When the laser resonator changes, the resonator lens needs to be fine-tuned to make the output light spot reach the best state;
(2) Fouling on the output diaphragm;
(3) Condensation is formed on the laser bar surface of the laser marking machine due to temperature difference.

2. The laser output power of the laser marking machine is normal, but the laser beam cannot complete the marking.

(1) The optical path system is not adjusted correctly;
(2) Acousto-optic switch does not play the role of switch;
(3) The sound and light output signal which is controlled by D/A card has not reached 5V.

(1) The laser output power did not meet the requirements;
(2) The switching power of the acousto-optic switch does not meet the requirements;
(3) The optical path system is not properly adjusted;
(4) The surface of the workpiece is not on the focal plane;
(5) The laser power supply output DC voltage is lower than 28V, resulting in the laser output power decline;
(6) The position and direction of the beam expander are not adjusted correctly;
(7) There are stains on the lens surface. 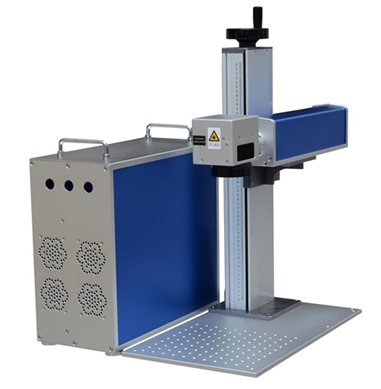 4. Acousto-optic switch of laser marking machine can not play the role of switching laser.

(1) The RF output power of the acousto-optic power supply is wrong;
(2) The position of each power switch is incorrect;
(3) The RF cable is incorrectly connected;
(4) There is a stain on the light end of the Q switch.

5. The marking effect of optical fiber laser marking machine is not uniform.

(1) The method of partial focal marking causes the pattern edge to be at the critical point of focal depth or beyond the focal depth range.

(3) Thermal lens phenomenon. That is, when a laser passes through an optical lens (refraction, reflection), it causes the lens to heat up and produce a slight deformation.This deformation causes the laser focus to rise and the focal length to become shorter. If the machine is fixed and the distance is adjusted to the focus, the laser energy density on the material will change after a period of time due to the thermal lens phenomenon, resulting in uneven marking effect.

(5) The film thickness on the surface of the material is inconsistent or changes in physical and chemical properties.

6. The krypton lamp of the laser marking machine cannot be ignited.

(1) Krypton lamp has reached the service life;
(2) The connection between the electrodes on both ends of the krypton lamp and the laser power cable is not strong enough;
(3) The working state of the laser power supply is abnormal. 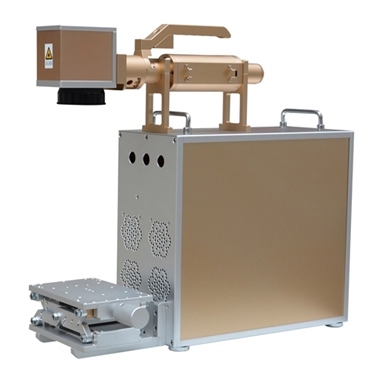 (1) There is no acousto-optic opening signal at the 8th foot (+5V), so the acousto-optic power supply cannot be turned on;
(2) The analog signal output can not accurately reflect the design content, that is, the phenomenon of disorderly code;
(3) AD7237 is not working normally, which shows that the print line is dotted line.

8. The marking pattern of the laser marking machine is partially unclear.

9. The output light of the laser marking machine is weak.

(1) The focal length has not been adjusted well, need to adjust the focal length again;
(2) The CW method of marking software is not selected;
(3) The cavity, total reflection mirror, half reflection mirror and beam expander are not adjusted properly and need to be adjusted again;
(4) The laser did not hit the center of the galvanometer, or the galvanometer of the lens is scratched;
(5) There is dirt or scratches on the lenses of total or semi-reflective lenses, focusing lenses, vibrating lenses and Q switch lenses. Then must be cleaned or replaced;
(6) The Q switch is not adjusted properly. Normally, the laser marking machine emits light when marking, and the Q switch should lock the laser when not marking. In addition, the current of the laser power supply should be increased, and you can place the frequency doubler in front of the half mirror to see if there is light-leaking . If the light leaks, the light will be weak, so you need to readjust the Q switch.

(1) The board, Q switch, Q driver, laser power supply, etc. are damaged;
(2) The optical path is not adjusted properly;
(3) The computer control system hinders operation, so try to reinstall the system or replace the computer;
(4) The signal connection between the board and the driver is in an open circuit, which needs to be replaced or re-welded.