Laser sensors utilize laser technology to measure. It consists of a laser, a laser detector and a measuring circuit. Laser sensor is a new type of measuring instrument. Its advantages are fast speed, high precision, large range, strong anti-light and electrical interference ability, etc. And it can realize non-contact long-distance measurement.

When the laser sensor is working, the laser emitting diode is aimed at the target to emit laser pulses. After being reflected by the target, the laser light is scattered in all directions. Part of the scattered light returns to the sensor receiver, where it is picked up by the optical system and imaged onto the avalanche photodiode. The avalanche photodiode is an optical sensor with an internal amplification function, so it can detect extremely weak light signals and convert them into corresponding electrical signals. The most common is the laser ranging sensor, which can determine the distance to the target by recording and processing the time elapsed from when the light pulse is sent out to when it is received back. Laser sensor shall determine the transit time extremely precisely since the speed of light is so fast.

For example, the speed of light is about 3×10^8m/s. To achieve a resolution of 1mm, the electronic circuit of the transit time ranging sensor must be able to distinguish the following extremely short times:

Recognizing the time of 3ps requires high electronic technology and the cost is too high. But today's laser ranging sensors cleverly avoid this obstacle, using a simple statistical principle, namely the averaging law to achieve a resolution of 1mm, and can guarantee the response speed. 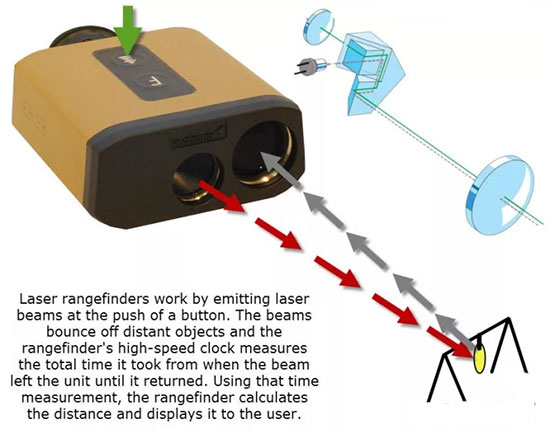 Laser sensors are often used to measure physical quantities such as length, distance, vibration, speed, and orientation. They can also be used for flaw detection and monitoring of atmospheric pollutants. The application fields are becoming more and more extensive. Two types of laser sensor are described below.

Laser ranging is actually an active optical detection method. The detection mechanism of active optical detection is: the detection system emits a beam (in optical detection, generally infrared or visible light) to the target, and the beam is radiated by the target surface to generate an echo signal. The echo signal contains the information to be measured directly or indirectly. The receiving and signal processing system obtains the measured quantity by receiving and analyzing the echo signal. The principle of the laser ranging sensor is the same as that of the wireless radar. After the laser is aimed at the target and launched, its round-trip time is measured, and then multiplied by the speed of light to obtain the round-trip distance. When measuring the distance, the laser rangefinder can accurately determine the target orientation, so it has been paid more and more attention.