What is a Single Phase VFD?

VFD (Variable-frequency Drive) is widely used in industrial automation field to improve industrial production efficiency and save business cost. It is a kind of power control equipment to control AC motor by changing the working frequency of motor, which can realize the functions of soft starting, variable frequency speed regulation, improving the running accuracy, changing power factor, over-current/over-voltage/overload protection for AC asynchronous motor. 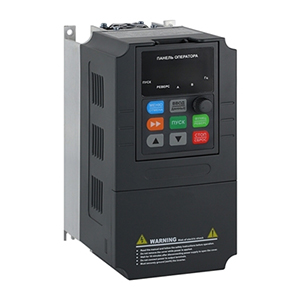 As a result of the use of a single phase VFD, the fan, pump load energy-saving effect is the most obvious, the power saving rate can reach 20% to 60%. This is because the power consumption of the fan pump and the speed of the cubic proportion, when the user needs a smaller average flow, the fan, pump speed is lower, its energy-saving effect is also very considerable. And the traditional baffle and French doors for flow adjustment, the power consumption does not change much. Since there are many such loads, accounting for about 20% to 30% of the total capacity of AC motors, their energy saving is of great importance. For some constant torque loads running at low speed, such as conveyor belts, etc., single phase VFD can also save energy. In addition, the energy consumption of the original speed regulation method is larger (such as winding rotor motor, etc.), and the original speed regulation method is more complicated and less efficient (such as gantry planer, etc.), after adopting the single phase VFD, the energy saving effect is also obvious.

A single phase VFD can easily achieve forward and reverse rotation of the motor. It only needs to change the switching sequence of the VFD inside the inverter to realize the output phase change, and there is no problem of burning the motor due to improper phase change. Most of the single phase VFD system starts from low speed and the frequency is low. The acceleration and deceleration time can be set arbitrarily, so the acceleration and deceleration time is relatively gentle, and the starting current is small, so it can start and stop at a higher frequency. The single phase VDF system braking, the VDF can use its own braking circuit, the mechanical load energy consumption in the braking resistor, can also be fed back to the power supply grid, but back to the grid need to increase the special accessories, a large investment. In addition, the VDF also has a DC braking function, when the need to brake, the VDF to the motor plus a DC voltage, braking, then no need to add another brake control circuit.

In addition to the application on fan and pump loads, the single phase VFD can be widely used in various mechanical equipment control fields such as transmission, winding, lifting, extrusion and machine tools. The frequency single phase VFD can improve the peculiar yield rate, extend the normal working cycle and service life of the equipment, simplify the operation and control system, and in some cases, even change the original process specification, thus improving the whole equipment control level.