What is an Electric Actuator?

An electric actuator is a drive device that provides linear or rotary motion. It uses certain driving energy and works under the action of a certain control signal. Actuators use liquid, gas, electricity, or other energy sources and convert them into drive-through motors, cylinders, or other devices. The basic types are Part-Turn, Multi-Turn, and Linear.
An electric actuator is also called a valve electric device, which is the name in different industries. In the industrial pipeline valve industry, it is called a valve electric device, and in the instrument industry, it is called an electric actuator.

An electric actuator refers to an actuator that uses electricity as energy in the control system. It can accept the electrical signal of the regulating instrument and other equipment, and then change the manipulation amount according to the size of the signal so that the material amount of energy change of the input or output control object can be automatically adjusted. In industrial production, electric control valves are the most widely used. 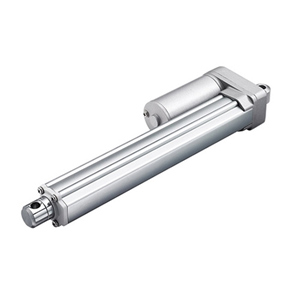 The working principle of the linear stroke and angular stroke electric actuator is to receive the standard value current signal of 4~20 mA sent by the regulator or other instruments, and after the actuator, it becomes the displacement thrust or the angular torque to operate the switch and valve. The task of automatic adjustment is completed. In the past, these two kinds of actuators were composed of two parts: servo amplifier and actuator. Now the structure of electromechanical integration is intelligent. But their structure, working principle and usage are similar, the only difference is that one outputs displacement (thrust) and one outputs rotation angle (torque).

The main advantage of electric actuators is the high degree of stability and the constant thrust available. The thrust generated by the largest actuator can be as high as 225000kgf. Only the hydraulic actuator can achieve such a large thrust, but its price is much higher than that of the electric actuator.
The anti-deviation ability of the electric actuator is good, and the output thrust or torque is basically constant, which can well overcome the unbalanced force of the medium to achieve accurate control of process parameters. Therefore, the control accuracy of electric actuators is higher than that of pneumatic actuators. If equipped with a servo amplifier, the exchange of positive and negative effects can be easily realized, and the valve position state (hold/full open/full close) of the off-signal can also be easily set. When a fault occurs, it must stay in the original position, which is impossible for pneumatic actuators. Pneumatic actuators must rely on a combined protection system to stabilize the position.

The linear actuator is a popular electric actuator, which converts the rotary motion of the motor into an electric device with linear reciprocating motion, which can realize remote control and centralized control. ATO series electric linear actuators have a compact design, the load capacity from 850N to 20000N high voltage, 12V/24V/36V/48V voltage, standard strokes are 100mm, 150mm, 200mm, 250mm, 300mm, 350mm, 400mm. Mini linear actuators are available. Special strokes and load capacities can also be customized for different application conditions.