What is an Oscilloscope Probe? 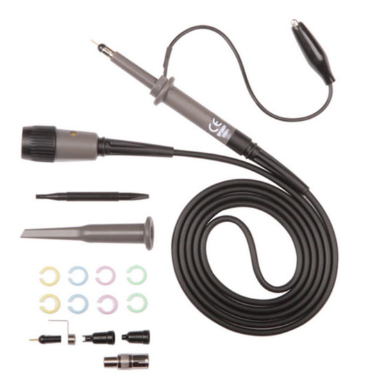 Most probes consist of a probe head, probe cable, compensation device or other signal conditioning networks and probe connector. To conduct an oscilloscope measurement, the probe head must be physically connected to the test point. To achieve this purpose, most probes have a long cable of 1~2 meters. However, the probe cable reduces probe bandwidth: The longer the cable is, the greater reduction of bandwidth. Except for a long cable, many probes are equipped with a probe head or probe handle, the probe head can fix the probe and users can move the probe to touch the test points. Generally, the probe is a hook with spring support, it can connects the probe with the text point. In order to obtain available measurements, the signal on the probe must be transmitted to the oscilloscope input with sufficient fidelity through the probe head and cable.