A power line filter, also called EMI power line filter, is a passive bi-directional network, electrical equipment which effectively filters the particular frequency point in the power line or the frequency out of the particular frequency point. Line filters are designed for electromagnetic interference (EMI) in the mains, and it is a frequency-selective two-port network usually composed of inductors, capacitors, resistors. Actually it is a kind of filters and can also be called reflection filter according the working principle. It provides high series impedance and low parallel impedance in the filter stop band, severely mismatching noise source and its impedance with load impedance, thus transmitting the undesired frequency components back to the noise source.

When selecting the power line filter, three main indicators should be considered: first is voltage and current, the following is insertion loss, and finally it is size and structure. Since the filter inside is typically potted, environment is not a main concern. However, the temperature characteristics of all potting materials and filter capacitors have some influence on the environmental characteristics of the power filter. 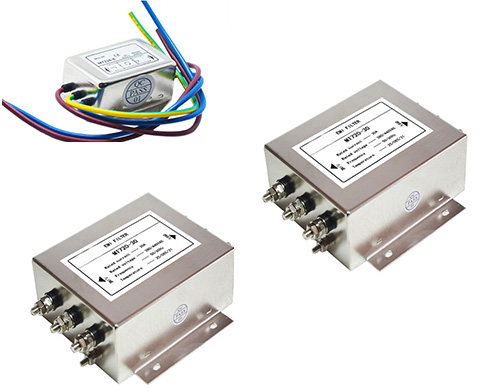 Power line filters are generally designed as passive filters composed of resistors, capacitors, and inductors, without active components like transistors. According to the characteristics of EMI at the power port, the EMI line filter is a passive low-pass filter, which transmits AC to the power supply without attenuation and greatly attenuates the EMI noise incoming with AC. At the meantime, it effectively suppresses EMI noise generated by power equipment, to prevent them from entering the AC power grid to interfere with other electronic devices.

The Figure below shows a typical power line filter schematic and it is easily to figure out its structure. This is a passive network, suitable for both AC and DC power with bidirectional suppression performance. It is placed between the AC power grid and power supply, which is equivalent to a shielding of EMI noise between them. Such a simple passive filter plays a role of two-way noise suppression that it is widely applied in various electronic devices.

As the above Figure shows, C1 & C2 is differential-mode capacitor, usually called X capacitor with suitable capacitance selection from 0.01μF to 2.22μF; C3 & C4 is common-mode capacitor, called Y capacitor with capacitance of about several nanofarad (nF) to dozens. C3 & C4 capacitance should not be chosen too large; otherwise it will easily lead to danger like current leakage from filter or even the case. L is a common-mode choke, which is a pair of coils twined in the same direction around the same ferrite ring, with inductance of about several millihenries (mH). For the common-mode interference current, the magnetic fields generated by the two coils are in the same direction, and the common mode choke shows larger impedance and thus attenuates the interference signal. For the differential-mode signal (here, it is the low-frequency supply current), the magnetic fields generated by the two coils cancel out, so the power transfer function of the circuit is not affected. Please note that this is single stage filter circuit. If you want a better filter effect, a two-stage filter can be used.

Power line filter's principle is an impedance adaption network: the larger the impedance mismatching between line filter input & output side and power & load side, the more effective the attenuation of electromagnetic interference (EMI). The specific working principle is as follows. After AC is rectified by diode, the direction is single, but the current intensity is still constantly changing. Generally, this ripple DC is not directly used to power supply. To make the ripple DC into a smooth waveform, one thing need to be done, that is filtering. In other words, the task of filters is to reduce the ripple in the output voltage of the rectifier as much as possible and transform it into near constant DC.

Comments
Guest
7/25/2020 9:15 PM
Good content
Guest
6/5/2021 8:52 PM
The third pin, the round one, is a protective ground.
No signal should be present on it unless there is a wiring failure.
Using it for any other purpose may defeat it, primary use which is protection.
A good practice would be to use a 4 conductors power cable where you have the LINE, the NEUTRAL, the FRAME GROUND and the SIGNAL GROUND.

In radio and telecommunication fields, one does learn very early on the need not to mix those two grounds.