What is SCARA Robot?

SCARA robots, also known as Selective Compliance Assembly Robot Arm or joint robotic arm, which are one of the most common forms of industrial robots in today's industrial field. SCARA robots are suitable for mechanical automation in many industrial fields, such as automatic assembly, painting, handling, welding and so on.

1. The movement of the SCARA robot arm.

The robot's robotic arm is made of several rigid rods and rotating or moving joint, which is an open ring joint one end fixed on the base, the other end is freely mounted end actuator (such as a welding gun). When operating the robot, end effector at the front of the robot arm must be in a position and attitude appropriate to the processed workplace, as well as these positions and postures are synthesized by the movement of several arm joint. 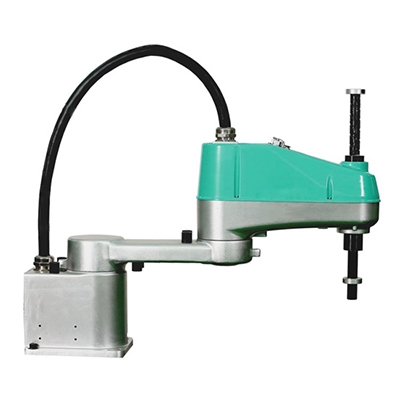 The motion path of the end of the robot manipulator is the space curve of the motion trajectory from the position and posture of the starting point to the position and posture of the posture. The task of trajectory planning is to use a function to "interpolate" or "approach" a given path and produce a series of "control set points" to control the robot movement. At present, the commonly used track planning methods include spatial joint interpolation and Cartesian spatial planning.

3. The control of the SCARA robot.

When a robot dynamic motion equation has been given, its control purpose is to maintain the robot's dynamic response according to predetermined performance requirements. However, because of the inertial force, coupling reaction force and gravity load of the robot, it is quite complicated and difficult to control it with high precision, high speed and high dynamic quality. At present, the control method used in industrial robots is to treat each joint of the robot as a separate servo mechanism, just put a nonlinear, inter-joint-coupled variable load system, reduced to a linear non-coupled separate system.